CALL FOR PAPERS: ‘The Modern Jewess: Image and Text’ 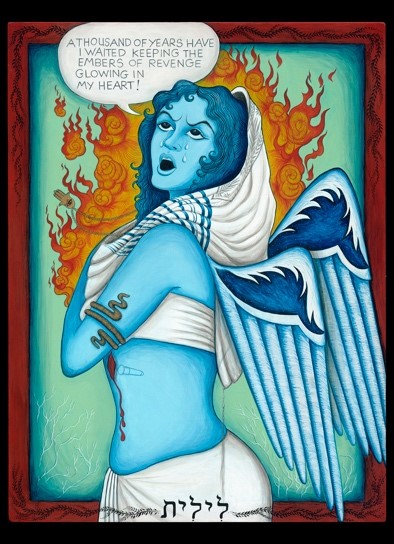 “I am a Jewess,” proclaims Mirah Lapidoth on first meeting Daniel Deronda in George Eliot’s Daniel Deronda, “Do you despise me for it?”

From Gertrude Stein to Lena Dunham “Jewesses” continue to be a ubiquitous presence in ‘high’ art and popular culture. Yet representations of Jewesses have received limited critical attention, especially in comparison to their masculine counterparts. In this transnational and interdisciplinary special issue of Shofar we seek to subject representations of the Jewess—her historical precedents and modern incarnations—to new critical examination. With the aim of understanding, interrogating, and perhaps even reclaiming the term ‘Jewess’ we will ask: who and what is meant by the term? Is it celebratory or derogatory? And what gender, racial and religious stereotypes are at stake in an examination of the Jewess and her representation?

Bringing together scholars working in a variety of disciplines, practicing artists, and creative writers, this special issue will endeavor to discover, understand and interpret representations of Jewesses in art, literature, theatre, television, film, and beyond. Papers that work across national, cultural, and genre boundaries are especially welcome, as are papers that undertake close studies of specific images and texts. We also encourage submissions of works in alternative creative formats.

Possible topics for inquiry include, although are not confined to:
• Diasporic and Israeli woman artists;
• Representations of Jewish women in contemporary Israeli, Arab and American culture and politics;
• Jewesses on Netflix;
• The reign of the Jewish American Princesses;
• ‘You never call, you never write …’ Jewish mothers / Jewish guilt;
• Transgender, queer and lesbian Jews;
• Feminist Jewish writers and artists;
• New perspectives on old stereotypes.

In her foreword to Jack Reimer’s foundational 1974 edited collection, Jewish Reflections on Death, a book that explores Jewish death and mourning through assorted lenses, Elisabeth Kubler-Ross inquires, “I have always wondered why the Jews as a people have not written more on death and dying. Who, better than they, could contribute to our understanding of the need to face the reality of our own finiteness?” Certainly, from the Kabbalah to dybbuks, from Sholem Aleichem to Roz Chast, there is no shortage of Jewish liturgical, mythological, literary, and cultural works incorporating related themes: of the boundaries between life and death; of the different approaches to philosophical, ethical, and religious questions pertaining to “the end”; and of ways of dealing with the practical and mundane matters that crop up around loss of life and its attendant issues. But the secondary literature on Jewish death and dying, i.e. historical, analytical, and comparative explorations of practices, rituals, beliefs, and narratives that span across Jewish landscapes, remains, as Kubler-Ross noted, surprisingly sparse. In this volume, we seek to put in conversation interdisciplinary investigations into whether, and if so how, contemporary Jews think and do death differently.

We are especially interested in cross-discursive explorations and are open to papers addressing the topic from a wide variety of viewpoints, including but not limited to:
• fictional and non-fictional stories of death and grief (including poetry);
• visual representations (art, photography, film, comics, collage, and/or graphic novels) of loss and its aftermaths;
• variations within or across ethnic, sub-ethnic, and racial groups and/or different regions and populations in relation to death and grieving practices and beliefs;
• material culture approaches to death and dying, including music, food, ceremony, clothing, etc.;
• social and communal functions of traditional and/or contemporary death rituals, rites, and ceremonies;
• connections and/or tensions between spiritual and/or traditional customs and observances and psychological or other models of grieving;
• gender and/or sexuality in death and grief;
• individual and communal trauma and attendant grief (genocide, suicide, etc.); and
• death, grief, and the body.

We welcome two categories of works: (1) short narrative-style pieces in the forms of poetry, visual narratives, and creative non-fiction prose; and (2) more traditional analytic research articles (in this category, hybrid-pieces incorporating first-person prose or creative non-fiction alongside research and analysis are also welcome).

Deadline for 250-word abstracts (or illustrative excerpts): August 15, 2018. In your abstract, please indicate what category of work you are submitting, (1) or (2), and the target length of your final piece. Email submissions, including a short bio, to lauralimonic@gmail.com and toksman@mmm.edu.

Authors whose abstracts are accepted will be notified in early fall and asked to submit final pieces by March 1, 2019. There is no target length for the shorter narrative pieces (category 1), though authors should aim for 1,500-4,000 words of prose or 3-4 pages for visual narratives. For analytical research articles (category 2), manuscripts should be 7,000 to 10,000 words and conform to the latest Chicago Manual of Style, specifically, the short note format with a full bibliography (see examples below). Essays will be sent for review.


CALL FOR PAPERS: The Feminist Art of Religious Women

In 2012, Rama Burshtein’s film Fill the Void was nominated for the Grand Jury award at the Venice Film Festival. This story of Orthodox Jewish life painted a sympathetic portrait that attempted to showcase women’s subjectivity within what has often been depicted on screen as an oppressive patriarchal society. Working with a rabbi’s supervision, Burshtein made a film that was not only acceptable within community standards, but that was publicly acclaimed, nominated for numerous international awards and found widespread success. In a feature article on Middle Eastern women filmmakers in Variety, Haaifa Al-Mansour, Saudi Arabia’s first woman filmmaker expressed her admiration for Burshtein’s shared experience of negotiating religious feminist artistic expression within sanctioned limitations. Her own films, such as Women Without Shadows (2005), which examines the hidden lives of women in Arab States of the Persian Gulf, have balanced the sanctions of religious Muslim society with a need to consider women’s positions within those societies from a critical perspective. Her films have won awards in the UAE, the Netherlands, and been nominated for awards at Cannes, and her feature debut Wadjda made its world appearance at the 2012 Venice Film festival.

In this collection, we are seeking papers that consider Jewish women’s feminist religious art in film, as well as a variety of other genres, including, but not limited to: fiction, television and web-series, music, stand-up comedy and other performance, and the more traditional visual arts. Strong consideration will be given to proposals that put Jewish women’s art in conversation with the artistic productions of or representing women of other religious traditions.

Please send abstracts of not more than 300 words (as well as any inquiries) to co-editors Karen E. H. Skinazi, k.skinazi@bham.ac.uk and Rachel S. Harris, rsharris@illinois.edu, by January 15, 2018.

Submissions of 8,000-10,000-word essays for the collection will be due June 30, 2018. Accepted submissions will appear in Shofar: An Interdisciplinary Journal of Jewish Studies in 2019.